In a softball season where victories have been measured in managing to get through all seven innings without getting 10 or 12 runned, in hitting the cutoff man, in catching the fly ball in the outfield, in a successful double play, in knocking the ball down in the infield, in pitching over and over and over again when your fielders aren't backing you up very well, or in a particularly good individual hit, it's hugely apparent how hurtful and inappropriate public fan disagreement with the umpires is. I don't care if you think a call was completely wrong. It does no one any good to berate the umpire. Hats off to the umpire who confronted the unsportsmanlike conduct of the man in the crowd last night. The truth of the matter is that umpires are a part of the game, and like the team members, are doing the best they can to be accurate. It is not the job of the fans to second guess those calls at the time they are made. It's part of the game, folks. 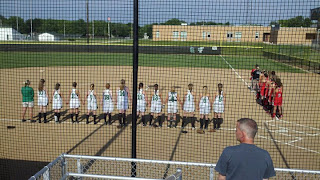 Hats off to Lily, Ashley, Shelby, Megan, Alanna, Alyssa, Maggie, Katie, Annabelle, Brenna, Emily, and Haylee. You girls have shown us what true sportsmanship and loyalty to one's school looks like. When we adults were teetering on the edge of calling off softball for the year, this group of mostly inexperienced girls continued to go to open gyms and let us know that they were willing to compete under the Tornado Green and White no matter what the wins and losses would look like. Hats off to your two game wins! Hats off especially, though, to your tenacity, your hard work, your undying spirit, and your love of the game. We adults could take a lesson. Good luck at Regional play this weekend! Posted by Sarah Freking at 8:08 AM No comments: