There was no logical reason for my applying for the job of District Technology Director for the Storm Lake Community School District twelve years ago. I was a late comer to education, a HS English teacher of ten years who spent most of those years also teaching technology classes while learning to manage all the technology needs of a small private school. For some reason I thought it was a good idea to shoot for the moon and throw my resume out there to a much larger school, and for some reason the Storm Lake Community School District said, "Why not?"

There have been many moments over the past twelve years that have made it clear to me why I am so very happy that the universe brought me here. Today was one of those moments.

Dakota Caldwell's presentation to the high school student body about the importance of technology to the quality of his life was inspiring. I met Dakota in my office a couple of months ago when he had some questions about a project he was working on. I was impressed with him then, and I was impressed with him today. He is well spoken, self assured, and intelligent. His message of encouraging more innovation was just what our students need to hear in this world of ever changing job markets and societal needs.

Dakota's presentation was followed by a group of student dancers who showed the rest of us grace, beauty, and the results of hard work and dedication. The athleticism that dancing had to have taken was phenomenal, and the pride in culture was apparent.

Both of these performances were awe inspiring, but there was something else that put me into that special place of "there is nowhere else I would rather be." That was the reaction of the entire student body. Both groups received rapt attention from the crowd. There was laughter. There were tears. There were appropriate whoops and hollers. There was complete silence. There were lit cell phones in appreciation of the dancers. And, there were spontaneous standing ovations for both of these performances. The appreciation of the talents of their peers was evident and palpable.

I don't know why I was so lucky as to have the universe align in some strange twist of life events to bring me to Storm Lake twelve years ago, but I do know this. Our schools are a model for the entire country. We are a community of learners who although far from perfect, as human beings are, come together over and over and over again in respect and caring for one another. I've seen and felt it a million times here at SLCSD. Today was one of those days.

#SLChangeMakers
Posted by Sarah Freking at 10:51 AM No comments:

Let us think of education as the means of developing our greatest abilities,
because in each of us there is a private hope and dream which, fulfilled,
can be translated into benefit for everyone and greater strength for our nation.
--John F. Kennedy

Think about every problem, every challenge, we face.
The solution to each starts with education.
--George H. W. Bush


Tomorrow Storm Lake voters go to the polls to vote on supporting the building of a new early childhood facility to accommodate our growing numbers of students.

What's best for kids? - Then you will vote yes.

What's best for Storm Lake? - Then you will vote yes.

What's best for society? - Then you will vote yes.

If you have any questions, take a look at this website.

But then I urge you to vote yes on both ballot measures. Our kids deserve it.

#SLChangeMakers
Posted by Sarah Freking at 12:41 PM No comments:

Fight for What's Right, but See the Good

My father died in August. I've mentioned him in this blog before. He retired from practicing law in his sixties but then proceeded to do pro bono work for Legal Aid for many, many years. His mission was to fight for the rights of the little guy, the person in poverty, the person whose life had led to desperate life situations. He fought for what was right, and he saw the good in people in all walks of life. He believed strongly in the right of every person, old or young, rich or poor, right or wrong, to legal representation, and he lived those beliefs working tirelessly and for free practically until his dying breaths.

This all comes to mind again this week with the passing of President George H.W. Bush. I watched the reactions of the various pundits, the current and previous Presidents, his political adversaries, and his friends. All I could think was how much I disagree with those who believe we can't honor the good a person does in a lifetime without agreeing with every life or policy choice. I felt the same way as I watched the celebration of Senator John McCain's life. Both of these men, despite many things I would disagree with politically, lived lives of public service and have long lists of good things they did for this world.

What, you may ask, does this have to do with education?

Our schools are microcosms of this political society. They are filled with people from all walks of life with thoughts and opinions as diverse as snowflakes on an Iowa winter day. However, they are also filled with people, staff and students, who are trying to make a difference in this world. We don't always agree on the best way to do that. Sometimes we make poor decisions and stumble along the way. Yet, despite our differences, we are all here learning together. We are committed to one another. Let us debate our educational beliefs strenuously, but let us always see the good in one another, especially the good in our students, and always honor that. 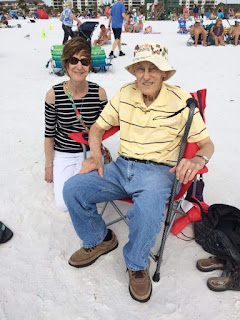 Posted by Sarah Freking at 10:36 AM No comments: